While the saying goes that numbers never lie, in the case of the African-American Male Initiative (AAMI) at the University of West Georgia, they also tell an amazing story. 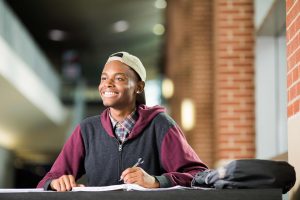 Over the past eight years, the AAMI program at UWG has helped more than 500 black male students, a group that has been historically underrepresented in higher education, progress through college and graduate on time. Since Fiscal Year 2011, AAMI cohorts have seen better retention, progression and graduation rates than that of the general student body, and this year they celebrated a retention rate of more than 88 percent.

African-American males are enrolling at higher rates, and more of them are being retained beyond the first and second years of college, UWGs Chief Diversity Officer Dr. Yves-Rose Porcena said. Data show students are able to progress and be retained if they are receiving the right support, utilizing available resources, and feel more connected to campus by being involved.

And thats what AAMI is all about  getting students involved and making sure they receive academic and social support as soon as they enter college. As a result, the dropout rate among a previously underserved group is quickly dwindling.

But how is this accomplished? The short answer is university community.

Students enter the AAMI program as a cohort. The cohort takes three to four classes together, they volunteer together, and they receive academic counseling and tutoring. However, Dr. Michael Hester  the AAMI coordinator  said this alone isnt the key to these students success.

AAMI programming is culturally conscious in that what AAMI students share in common  being black, male and in their first year of college  is taken into consideration when deciding who to bring in as guest speakers and what topics to cover when engaging in group discussions, Hester explained.

Hester credits this comprehensive approach with the success the program has seen. Having a curriculum representative of their experience has had a direct effect on their grades.

Research on student success shows that students who feel comfortable in their academic surroundings perform better, and feelings of inclusion contribute to that comfort level, he pointed out.

As the students feel more included, they also give more back to the community, Porcena said. All AAMI students take part in volunteer activities such as the Keep Carroll Beautiful Adopt-A-Mile program, volunteering at the Boys & Girls Club and mentoring at Carrollton Elementary. They also learn strategies that contribute to making UWG the best place for everyone to work, learn and succeed.

For example, this year AAMI students are learning how to reduce implicit bias as part of a grant from Lumina Foundation, an independent, private foundation committed to making opportunities for learning beyond high school available to all. Several will have the opportunity to travel to Brazil this spring as part of a course on multicultural societies.

But administrators are not the only ones singing the praises of AAMI. Students say the program gives them a sense of security and guidance as they begin their collegiate careers.

I was really concerned going from high school into college about how I was going to handle that transition, David Ndozi-Ndikanwu from the FY14 cohort said. I really needed a support system to help me through college. Time management was a big concern of mine because in college youre on your own. AAMI opened doors for me and helped me balance campus involvement with school work. I was surrounded by people who motivated me. The first year in college can be overwhelming, but this program helped set me on a path to success and map out my goals.

Terence Whitlock, currently a sophomore and a member of the FY17 cohort, said the program helped him break out of a self-limiting mindset in which he thought he was only good at sports. Whitlock said he had more success in class than he anticipated, and as a result, hes maintained his status on the deans list into his second year at UWG.

AAMI inspired me to continue to take part in student activities and get involved with different student departments, Whitlock said. By doing so, I ended up finding a passion for wanting to be an advocate for minorities and worked hard to obtain the knowledge necessary for me to do just that. Now, I am acting president of BEST (Black Men Encouraging Success Today), where I seek and give opportunities to minorities that better help them stand out from the crowd.

Porcena said feedback like this has bolstered the decision to increase the number of men accepted into the program each year. Whereas in the past, 24-36 students were accepted, this years cohort has 60 participants. Next year, they expect to raise it again to 72 students.

Last year was my first as coordinator, Hester said, and already members of last years cohort have come to me and remarked on how much they enjoyed the experience and how it has prepared them for this year. When a student tells me this program is the reason he is still here, that makes all the hard work worth it, and watching them work together and grow into leaders is inspiring to observe.