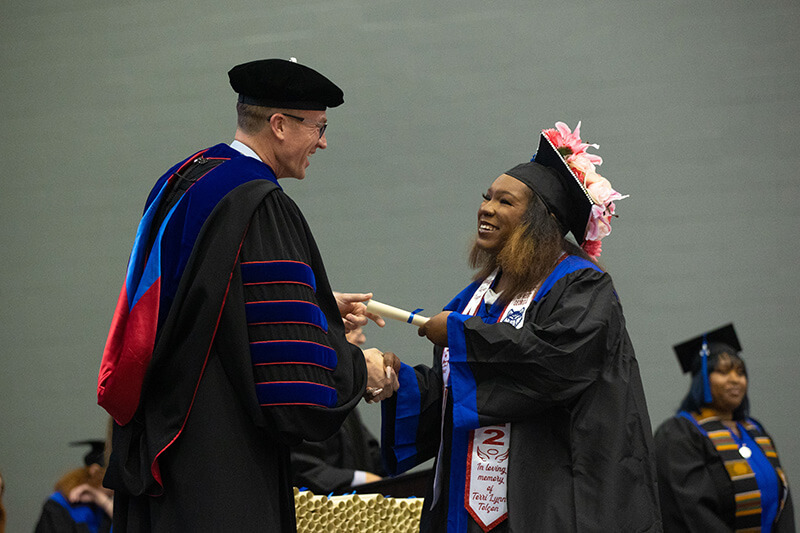 Nearly 1,100 journeys into higher education culminated on Saturday, as the University of West Georgia graduated a record number of students during Fall Commencement ceremonies.

It is each student’s journey of becoming that President Dr. Brendan Kelly called the central focus of the institution.

“You will likely notice that, after today, people will look at you a little differently because you have changed,” Kelly said. “You have become some other thing – whether that’s a nurse, teacher, accountant or any number of other professional individuals. You are now something that you were not before. This is not the end. It is a new beginning.”

Of the 1,090 degrees conferred, 541 were at the graduate level, with the remaining 549  degrees being earned at the undergraduate level. All three ceremonies were live-streamed.

Commencement ceremonies began at 10 a.m. for undergraduates from the College of Arts, Culture, and Scientific Inquiry and the Tanner Health System School of Nursing. The 2 p.m. ceremony featured undergraduates from the Richards College of Business; the College of Education; the School of Communication, Film, and Media; and University College. All graduate students from each school and college were recognized at 5:30 p.m. Saturday’s graduating class was the largest fall class in the university’s history.

After highlighting select graduates and their achievements while enrolled at UWG, Kelly said they were but a few representatives of a class of “courageous individuals.”

“Pursuing new aspirations and stepping outside your defined space takes courage,” he explained. “It takes tenacity and grit to make things happen for you, for your friends and family, and for the organizations we serve. It is easier to be courageous, though, when you have a support system of people who have your back. Fortunately for us all, there are a whole bunch of people – including thousands at the University of West Georgia – who are behind you and who want to see you go and make things happen.”

Assisting in the transition from a community of students to a community of graduates was Brad Mock, chair of the UWG Alumni Association board of directors, who officially welcomed them to the association.

“Legacy is not something you leave behind; it’s something you chase, work for and maintain every single day,” he concluded. “Rather than the end of an era, think of today as a fundamental chapter in your lifelong book of legacy. No matter what your history is, today is the future. Today is the day you have been pursuing. Today is your legacy day, and we are thankful you chose to pursue this day at the University of West Georgia.”