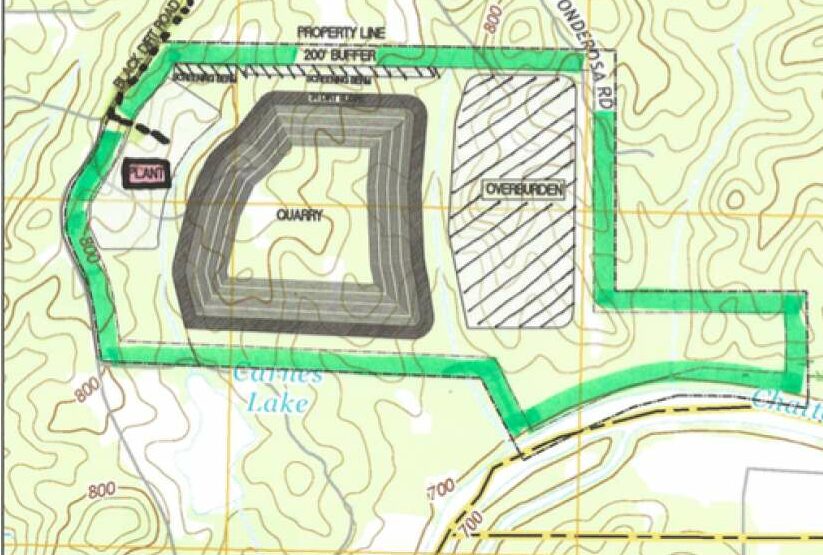 It appears that Carroll County government has run out of legal options in the fight to prevent Green Rock LLC from building a $20-million rock quarry outside the city of Whitesburg. The Georgia Supreme Court this week unanimously denied the county’s latest application for appeal.

However, independent coalition Citizens Opposed To Carroll County Rock Quarry on Wednesday suggested they will not give up the fight.

It was back in June of 2020 when WLBB Radio first told you about a developer’s proposal to build a new “construction aggregate facility for mining and shipping” off Black Dirt Road, north of Whitesburg city limits.

The property to be used was zoned agricultural. At that time, ag zoning—covered the development of natural resources including the removal of minerals and natural materials, so re-zoning, in theory, would not have been one of the obstacles the developer would face.

In August of 2020, the Carroll County Board Of Commissioners approved an amendment to the county’s zoning ordinance which moved ‘mining projects’ out of agricultural zoning and placed them under an industrial zoning.

In November of 2020, Carroll County denied Green Rock’s commercial building permit application and application for zoning compliance certificate; and, the Environmental Protection Division refused to approve the company’s permit application, unless they could obtain a letter from local government stating that the proposed quarry would be consistent with the land use in the area.

The local government apparently did not hand over such a letter.

In December of 2020, Green Rock filed a lawsuit against Carroll County, saying commissioners improperly changed the county’s zoning rules to keep the quarry from getting a zoning certificate. And, without that document, Georgia’s Environmental Protection Division wouldn’t give Green Rock a mining permit.

In civil suit. Green Rock LLC Vs. Carroll County, the Birmingham-based plaintiff argued primarily that under an ordinance that existed prior to august 2020, Green Rock’s well-documented plans would have been allowed to continue. The property is zoned agricultural, and up until August, the removal of minerals and natural materials was permitted. The county board of commissioners approved removing that allowance from agricultural zoning in August.

Green Rock alleged that amending the ordinance was discriminatorily enacted, and therefore unconstitutional.

More than 20 months later, the court made its final decision relating to this particular issue.

“While we are disappointed by the supreme court’s decision to deny our application, this is not the end of the road.” Said Tonya Spinks, co-founder of Citizens Opposed To Carroll County Rock Quarry. “We are not ready to give up the fight for the health, integrity, and well-being of our neighbors and community as a whole.”

“We are not going to leave any rock unturned,” said Wilson Pate, also a member of COTCCRQ. “There is too much at stake and there is no doubt that Green Rock won’t stop with Carroll County. Our coalition is committed to continuing our mission of stopping the rock quarry and ensuring a safe and peaceful future for the citizens of Carroll County and the surrounding area.”

Carroll County officials told WLBB Radio Wednesday that they are very disappointed the supreme court chose not to review such an important issue affecting so many people.

“The county will comply with the trial court’s order moving forward,” a county official said.