(PRESS RELEASE -BREMEN, GA/HARALSON COUNTY/January 23, 2020) Tyler Paul Smith has announced his candidacy for election to the 18th District of the Georgia House of Representatives, following the announcement that Rep. Kevin Cooke is retiring from the Georgia House of Representatives to run for Congress.  Tyler Paul is running on a conservative agenda and pledges to fight for smaller government, sustaining life, protecting our values and fueling a stronger economy.  Smith believes his work, alongside many others, will make West Georgia and our State a better place to live, work and raise a family. 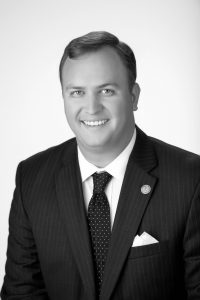 As a native of West Georgia, I believe in giving back to the community which has invested so much in me, said Tyler Paul Smith. I plan to work hard, earning each vote of the hardworking taxpayers of the 18th District and would be honored to serve our community in the Georgia House of Representatives.  We need a strong voice to remind the folks under the Gold Dome that West Georgians play a major role in the success of our state.

Tyler Paul Smiths main goals for his candidacy include:

       Smaller government  The government cannot create jobs.  However, a conservative government can encourage and support an environment where potential jobs are created, while not placing burdens and red tape on the growth process.

       Sustaining life  Over the past several years the birth rate has slowed and is the lowest it has been since 1918.  Abortion has devastated our state and country.  The joy and blessing that children bring is a cause I am going to fight for every day.

       Protecting our liberties and values  As a committed follower of Christ and dedicated conservative, there is no doubt that our way of life is under assault.  I will fight to defend our values and protect our liberties.

       Stronger economy  For our business community to grow, we need to create a better environment for business growth for people in our area and our infrastructure certainly has the potential to meet the needs of an ever-changing employment climate.

Tyler Paul Smith grew up in Haralson County, Georgia and graduated from Bremen High School.  Tyler Paul earned a bachelors degree in Political Science from The Citadel: The Military College of South Carolina. While there, he served as the chairman of the Honor Committee, president of his class, and received the John O. Willson Ring upon graduation. Afterwards, he received a Juris Doctorate from Atlantas John Marshall Law School. He served as a Legislative Aide to several State House Representatives from the local West Georgia, North-East Georgia and South Georgia areas where he provided policy insight and advice on various legislative changes to the laws of the State of Georgia during three legislative sessions.  Currently, Tyler Paul helps run his familys farm as a fifth-generation farmer and is an attorney at The Law Office of Julie C. Moore, L.L.C.