A Whitesburg woman charged with three counts of aggravated assault against a law enforcement officer along with several other offenses last week is out of the Carroll County Jail after posting a $35,000 bond.

What started out as an attempt by police to assist the woman who had called 911 stating that she was being followed by some males, turned into a high speed chase through parts of Carrollton and Carroll County.

According to the police report filed by Carrollton Police Corporal Rob Holloway, at approximately 3:00 a.m. Thursday, officers made initial contact with 39-year old Monica Faith Smith as she sat in her 2018 Nissan Versa in the parking lot of the Carroll County Sheriffs Office.

According to the police report: Corporal Lloyd Lesley was speaking with her and it was obvious that she was under the influence of some type of drug. Her eyes were dilated and her lips had burn marks on them from some type of pipe used to inhale drugs. She was not making much sense while conversing with police and she stated she was worried police were going to hurt her. All three officers on the scene attempted to assure Smith they were trying to help her.

During the meeting, one officer noticed a small child who appeared to be around five years old, sitting in the front passenger floor board. Officers say they attempted to speak to the child to calm him/her, but the woman in the drivers seat would not allow us to speak with the child which officers say they found odd due to us being friendly and trying to give the child a sticker.

Officers stated they were concerned for the safety of the woman and the well-being of the child.

They attempted to make contact with the subjects family.

At some point during the conversation with the female subject, Officer Holloway returned to his vehicle and spoke with dispatch. When he returned to the womans vehicle, he observed her buckling the child into a car seat in the middle rear seat. He believed she was intending to leave the scene. All of the windows in her vehicle were rolled up and according to police she refused to roll them down. Police say they attempted to open her car door, but it was locked.

According to the police report: Officer Josh Perry ran behind the vehicle to get to the passenger side. Officer Lesley moved a patrol vehicle directly behind her vehicle. As she put her car into reverse, police gave verbal commands for her to stop, but she failed to do so. Perry was walking around the rear of the vehicle and her Nissan struck him via the rear passenger side bumper/ trunk. The suspect left the parking lot towards Independence Drive. Police returned to their vehicles and followed toward Highway 16 traveling north bound towards Highway 166 Bypass.

Officers Perry and Lesley attempted to perform a rolling road block to stop the suspect, but her vehicle struck the front passenger bumper of a patrol car. The officer inside then moved over to the shoulder to allow the other two police vehicles to pass.

Officer Holloway says the suspects vehicle reached speeds of 80mph on Highway 16 in a 55 mph zone.

Holloway alleges that the suspects vehicle came over in his turning lane trying to run me off of the road.

The suspect  drove through the red light on Central High and turned left going south bound on South Park Street.

Officers made the decision to park and block northbound lanes and southbound lanes with their vehicles to stop the suspect and to  block any oncoming traffic for the publics safety.

The suspect avoided the location of the parked police cars and turned into the Holiday Inn Express. Her vehicle sped through the parking lot and to the back where the car crashed into the woods.

The suspect, the young child and officers involved were all able to avoid serious injury.

Officers are awaiting results of the suspects toxicology test from the GBI. 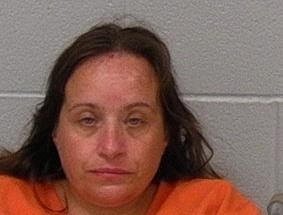 The suspect has been charged with three counts of Aggravated Assault and Fleeing and Attempting to Elude.