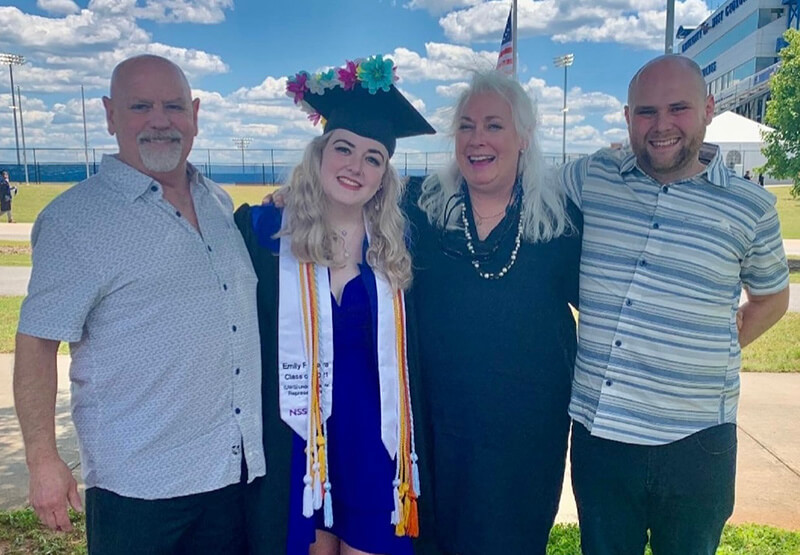 When Emily Ferreira ’21 was still nonverbal at age 2, medical and speech professionals rallied around her family to help the toddler. The team eventually included speech-language pathologists (SLP) at the University of West Georgia.

“It is extraordinary and humbling how I went from receiving speech therapy in CCC to providing the same service,” Ferreira mused. “I have a personal understanding of people with the same obstacles I once had. Growing up with learning differences and overcoming speech and language disorders has encouraged me never to accept failure.”

Although she passed her newborn hearing screenings, recurring ear infections, clogged ears and the rupture of both eardrums contributed to severe hearing loss. After ear tube surgery, she regained most of her hearing when she was around 3 years old. By that time, however, the developmental delays had drastically affected her language abilities.

“In kindergarten, while all the children learned to count to 100 and read Dr. Seuss, I learned how to talk,” Ferreira recalled.

Her mother drove her to anyone who could help – ear/nose/throat specialists, occupational therapists and speech therapists. UWG’s CCC was an hour away, but it was worth it. As the years went by, Ferreira improved and began to consider SLP as a career. During high school, she began shadowing the speech therapist at The Bedford School in Fairburn, Georgia.

“The SLPs I had as a child were influential and helped shape me into the person I am today,” Ferreira said. “After the first student I observed, I realized there was no other career path that would be as fulfilling as speech language pathology.”

With UWG already on her radar, Ferreira knew it had an outstanding reputation; there was no question as to where she would attend college.

“When I received my acceptance letter, I cried tears of joy,” she shared. “Receiving speech therapy as a child at UWG’s CCC affected me in such an impactful way. I couldn’t imagine becoming a speech-language pathologist anywhere other than the place that made it possible for me to do so.”

As an undergraduate in COE, under the guidance of Associate Professor of Communication Sciences and Disorders (CSD) Dr. Lama Farran, Ferreira and colleagues had the opportunity to present research at multiple conferences. After she received her bachelor’s degree last year, Ferreira seamlessly transitioned to graduate school. Her responsibilities at CCC gradually increased as the semesters progressed, from observing student mentor’s sessions with clients to having her own clients and mentees.

“I’ve had the opportunity to work with clients from the ages of 2 to 8 with a wide range of language difficulties,” Ferreira detailed. “While working at CCC, I learned a tremendous amount from my supportive supervisors, who gave me great feedback, and I became more confident in my skills.”

Ferreira said exceptional education and research opportunities at UWG have thoroughly prepared her for an SLP career. In addition to working at CCC, she is on the executive boards for UWG’s American Sign Language club and the National Student Speech Language Hearing Association and works at UWG’s Pre-K program as a graduate student clinician.

“These hands-on activities have been so valuable, and UWG has also given me the opportunity to form close bonds with my cohort and professors,” she said. “The supportive atmosphere and engaging coursework have helped me maintain a 4.0 GPA every semester. Due to my background, I empathize with the clients I work with. I have been where they are, and I know my clients will also be successful because I have had excellent professors and supervisors who have prepared me for this.”

Now that she has completed all her graduate school coursework, she is working at an elementary school in Carroll County under the supervision of an SLP through December. In January, she will move to a medical facility, which will be followed that summer by a medical externship. After a planned graduation in May 2023, she will complete a nine-month clinical fellowship.

“Today, my learning disabilities are no longer disabilities as much as they are simply differences,” Ferreira concluded. “I am looking forward to what the future holds. I once dreamed of being where I am now, and I couldn’t be happier.”