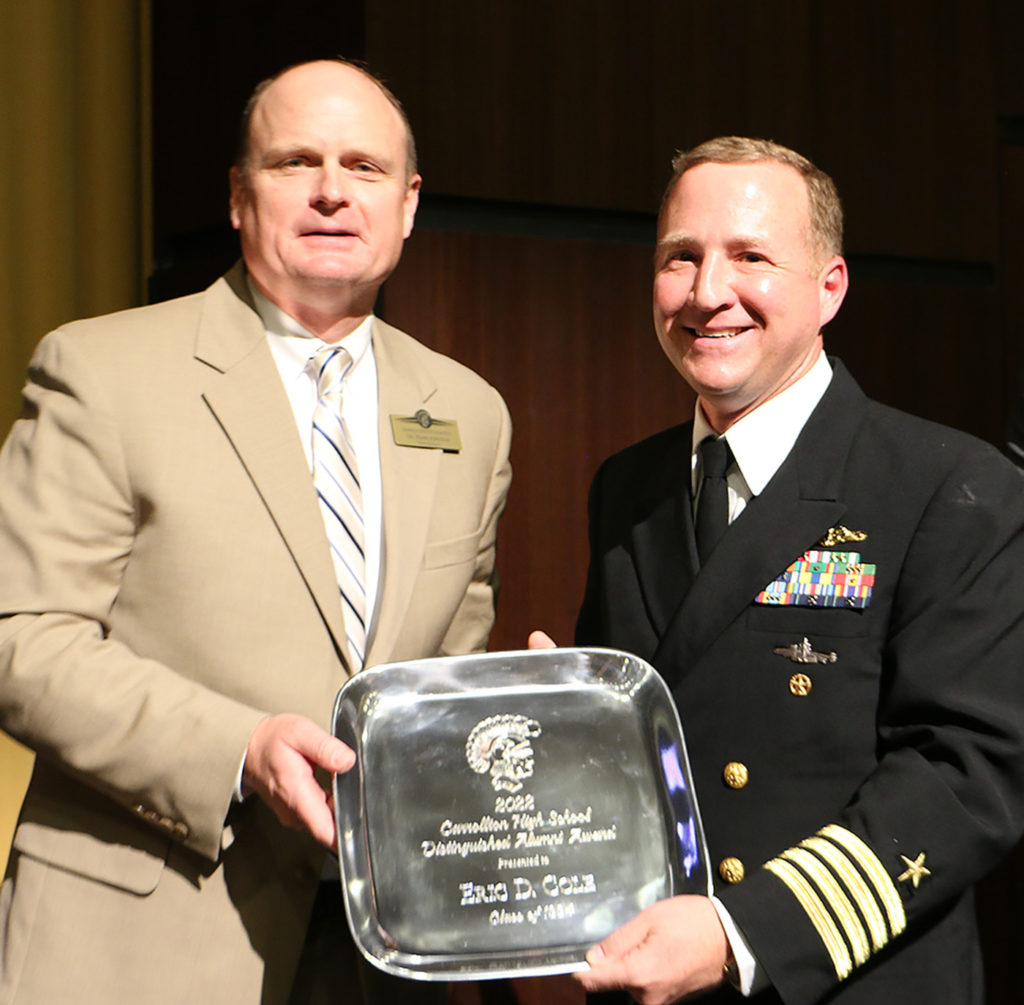 CARROLLTON, GA – A laser-focused alumnus who had his sights set on earning an appointment to the United States Naval Academy not only succeeded in his quest, but continues to gain the respect of his superiors and his peers that has allowed him to progress on an upward climb as a military leader who is just now in the prime of his career.

A captain in the United States Navy, Cole was one of only 1,400 of the 12,000 men and women who applied to the Naval Academy his senior year who secured an appointment following graduation. There he earned a degree in electrical engineering as an academy midshipman, or cadet, and later a master’s in engineering management at Old Dominion University.

His prowess as a leader was recognized early on with opportunities to serve on nuclear submarines with his success ultimately elevating him to the rank of commander, a senior-level officer, then captain, which is comparable to an U.S.Army colonel. For his service career to date, he has earned the Defense Superior Service Medal, the Legion of Merit, Meritorious Service Medal, the Navy and Marine Corps Commendation and Achievement medals, and many unit awards, of which he is particularly proud as they reflect the mutual respect and camaraderie he shared with those whom he has served.

He has also had the honor of meeting three U.S. presidents in person: Georgia H.W. Bush when he was an academy midshipman; Bill Clinton, who presented him his diploma at his Naval Academy graduation; and Jimmy Carter, who visited the USS Jimmy Carter nuclear submarine, named in his honor, while Cole was an engineering officer aboard the vessel.

Inspired by the service of his grandfather during World War II, Cole told his parents, at the tender age of 14, that he wanted to enter the military. Since that day, Cole’s path was deliberate and intentional with his Carrollton High School involvement preparing him well for his next steps, based on CHS records documenting his involvement as a student and athlete.

His high school activities included participation in the Trojan band, as a competitive swimmer and tennis player, and as a member of several academic clubs and honor societies. This all was done in just three years since he spent his freshman year in Germany as an exchange student. And despite his involved schedule, he held a part-time job at the Kroger deli to further demonstrate his work ethic.

Following his last assignment at sea as commander and captain of the USS Alaska, in 2019 he was appointed to serve as chief of the Nuclear Enterprise Division of the U.S. European Command in Germany and in 2021, as director of Nuclear Operations for Commander Submarine Forces Atlantic, based in Norfolk, Va., where he and his family reside today.

“There is an old African proverb that states it takes a village to raise a child,” Cole told the audience following his induction. “Believe me, I am no exception to that proverb. I believe Carrollton then was the perfect city, and remains today the perfect village to take on that role. Carrollton is still raising great young men and women like the students in this audience tonight – just as it did 30 years ago.

“I say this with the deepest sincerity that this town, and especially the Carrollton school system and city athletics are some of the best I’ve seen in the country,” Cole continued. “When I say the town is the best, what I really mean is the people. Not just the teachers, but the entire town of Carrollton is invested in the future of every student in this audience tonight. Parents helping parents, business members and business owners helping the school and yes, teachers and faculty providing a solid, well-rounded education to students. It is through this well-rounded education that each of the students will build the foundation for future academics and lifelong careers.”

Cole then turned to the students, sitting on stage behind the podium. “The fact that you’re here at honors night is an achievement in itself. Each of you should be proud of yourself,” he said.

“However, you shouldn’t rest on past success. Tonight is just the beginning. You must continue to challenge yourself and strive for excellence in everything you do. Yes, you will have failures along the way in both your academic journey and in life; however, if you look deep into yourself you will learn from those failures to ensure similar events don’t happen again. That’s how you will fulfill your future success.”

“Thank you, Captain Cole, for allowing us to share your accomplishments with our community,” he said. “While you are still in the prime of your career, we are humbled by the affiliation and eagerly look forward to what else you will accomplish in the future.”