CARROLLTON, GA — Though the COVID-19 pandemic continues to impact school events across the state, Carrollton High School is looking forward to continuing its long-standing homecoming tradition this year.

CHS principal Ian Lyle said homecoming is an important event not just for the students — but for the community. Dating back to the 1800s, it is the tradition of welcoming back former students to celebrate their school’s existence. Last year, all reunions that traditionally happen during football season were canceled because of pandemic concerns. Many of the reunions have been rescheduled for this year.

“Although a lot has changed over the years at CHS, some things have stayed the same,” said Lyle. “Homecoming is one of the most special events we have every year.”

Lyle also noted the district’s mission to create homecoming excitement at all grade levels —  especially when it is time for the parade, which will begin at 1 p.m. on October 1.

“We are lucky to have all of our schools on one campus, so homecoming is truly a districtwide experience, especially for the parade,” he said.

Because of  COVID-19 concerns last year, modifications were made to the event for safety. Schools spread students out along the parade route and designated specific areas for community viewing to encourage social distancing.

The change was so well received that the district decided to keep it in place for this year’s parade.

During the pregame will be the sweetheart presentation, followed by kickoff at 7:30 p.m. In addition, the homecoming court will be recognized, including the announcement of the 2021 CHS Homecoming Queen during halftime, along with the charitable giving results.

Developed over a decade ago as a spin on traditional homecoming festivities, the “Gold and Black Give Back” campaign partners each CHS class with grades in the three lower schools to collect specific items for charities. The class with the most donations in terms of dollar value wins the competition and bragging rights until the next homecoming.

For the latest updates on 2021 homecoming, go to 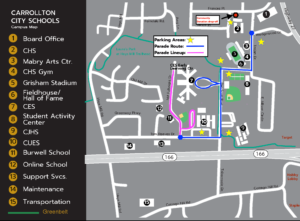