(Carroll County, GA) On August 18, 2020 Chairman Michelle Morgan hosted a 100th Anniversary Celebration honoring the 19th Amendment to the United States Constitution that gave women the right to vote. Chairman Morgan read a Proclamation which recognized the courageous and powerful women who fought for the ratification and celebrated the 19 women currently serving in elected positions within Carroll County. Carroll County is proud of all those serving and for those women who attended the celebration today in a way to gather together and pay homage to those who lead the way to make it legal for women to vote, but help make them into the leaders they are today. 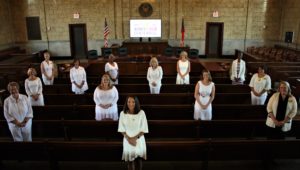 The event was attended by a majority of the female elected officials in Carroll County, along with community partners, the League of Women Voters, and male elected officials who wished to show their support for women’s right to vote, as well as to serve in office. As of 2020 sixty-eight million women vote in elections because of those who never gave up the fight for equality.