A group of talented musicians from the Bremen High School Band have the highest number of spots secured in the school’s history in the District Honor Band and the All-state Honor Band as led by the GMEA (Georgia Music Education Association.)

The District and All-State Honor bands have a limited number of seats, which are vied for by students across the state. And hard work goes into preparing for these auditions.

BHS band members to earning a spot in the District Honor Band, and will perform in Ringgold, GA on February 14, include: 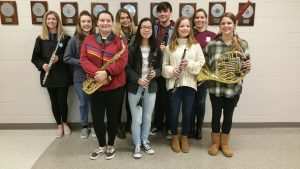 The All-State Honor Band members, chosen from the entire state as our top musicians, will travel to Athens for the All-State performance on March 7 and include:

Auditions were held Jan. 11, during which the top players were selected from around the state.

“It’s a two-round process, so they had to get through district auditions,” said BHS Band Director, Chuck Jindrich. “And if they scored high enough, then they were able to audition for the state.  We are so very proud of these nine students and their accomplishments.”