Eason taught Audrey as a sixth grader in an accelerated math class and later at the high school where she teaches advanced algebra and analytic geometry. Why did Audrey pick Eason?

“She taught me everything I needed to know for the math portion of the SAT,” she said. 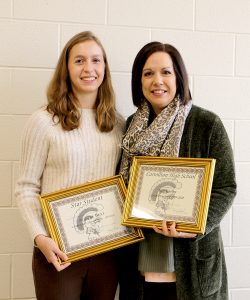 This is the third time in five years Eason has been chosen as STAR Teacher, first by William Curvino in 2016 and Katie Rubino in 2018. All three cited Eason’s influence on them as middle school accelerated math students in addition to the high-level coursework they were exposed to at CHS under her charge.

“It is such an honor,” said Eason. “I feel like lightning struck three times – and the fact that the STAR Student makes the decision is extra special.  I couldn’t be more humbled.”

The STAR student award is presented to the graduating senior who posts the highest SAT score of his or her cohort and is in the top 10 percent of the class. Audrey is in the process of choosing between the University of Georgia or University of Alabama to study engineering. In September, Audrey was named a National Merit Scholarship Program Semifinalist, joining an elite group of less than 1 percent of high school seniors nationwide.

In addition to her strong academic performance, Audrey is also an athlete who competes in tennis and cross country. She is the daughter of Ronald and Mary Jo Best of Carrollton.

The pair now will compete at the region level with hopes of advancing to the state competition this spring. The STAR Student/Teacher program is sponsored locally by the Carroll County Chamber of Commerce and by the Professional Association of Georgia Educators thereafter.