Haralson County Sheriff’s Office investigators are asking for help in locating a 22-year old mother of two whose own mother says she has not been in contact with her family since last Wednesday.

Investigator Heather Mecillas said Alecia Elizabeth Newsome left her Haralson County residence on Wednesday driving a light blue Chevrolet Aveo. She texted her mom that afternoon saying she was going to Bremen to pick up a friend and take him to the store. Investigators have had a conversation with that friend and say they continue to follow leads. The sheriff’s office also said she may have been headed to a doctor’s appointment. 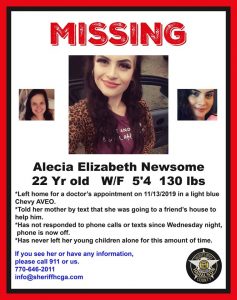 Mecillas said Sunday, at this point in the investigation, “we are unsure if she has left on her own or if foul-play may be involved.”

Anyone with information on her whereabouts, should contact the Haraslon County Sheriff’s Office.