CARROLLTON, GA – The Pope-McGinnis Student Activity Center has been up and running this fall with the Trojan varsity football team practicing there a couple times every week – but the facility has been helping more than the athletes at Carrollton City Schools. The Carrollton High School Marching Band has been practicing in the complex, too.

With a full regulation-size indoor field, the complex gives band members a break from the scorching, record-breaking heat while not losing field time to practice the drill for their competition show “Wanted: Dead or Alive.” 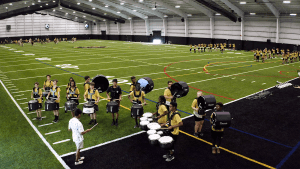 This image taken with a drone shows the massive scope of Skinner Field in the Pope-McGinnis Student Activity Center and how advantageous the indoor space can be for a bevy of activities – including band practice.

Band Director Chris Carr said he is excited about the opportunities Pope-McGinnis Center has provided for the band program thus far.

“Our Saturday rehearsals were far more productive this year because we were able to use the indoor facility during the hottest part of the day! I really look forward to being inside the facility for the morning blocks of band camp in the future which is a time that we focus on learning marching fundamentals and the beginning stages of learning drill.  Having the ability to get out of the heat during the hottest weeks of July will allow us to be more productive during the longest rehearsal days of our season.”

Additionally, Carr said the football team and Coach Sean Calhoun have been supportive of giving the band more time to practice in the SAC.

“The football team has been gracious to allow us more time in the stadium,” said Carr. “This  is advantageous because it allows us to have a soundcheck and become more comfortable in our performance venue.  Marching band requires more electronics and microphones than it used to, so having the ability to set sound levels inside the stadium more regularly is a huge advantage for our band program.”

“I’m looking forward to never having to miss an opportunity to practice our drill due to weather,” said Menendez. “That has held us back in the past. Now the potential is unlimited.”