(Carroll County, GA) Deputy Michael McDowell was sworn in by Sheriff Terry Langley on January 5, 2022 to serve the Carroll County Sheriffs Office in its newest position as the Community Programs Coordinator. Sheriff Terry Langley has been working towards creating this position for quite some time, as he understands the needs of our citizens to improve their quality of life and he desires to continue to build trust and a mutual respect between the Sheriffs Office and the greater Carroll County community. As the Sheriffs Office has become more active through the years utilizing social media and news media to push out information to our citizens, thoughts and ideas have been shared on expanding programs and crime prevention efforts.

Deputy McDowell will serve in this position as a liaison between the Carroll County Sheriffs Office and the public. He intends to progressively expand the Countys Neighborhood Watch Program, develop and present educational programs, and partner with a multitude of organizations to enhance crime prevention efforts. He will also play an integral role as part of our social media team, assisting with the production and materials to keep the public informed and engaged.

When preparing to create and fill a position such as this, finding the right person to step into this role is vital. When Deputy McDowell showed interest in joining the Sheriffs Office, I knew immediately he would be a perfect fit. I have been familiar with Deputy McDowell through the years, and as I stated in his swearing in ceremony, he is a staple in the community, and by observing the number of people who came to support him during the ceremony, it further shows the lives he has touched, and the amount of love and respect his peers have for him. Deputy McDowell is going to be excellent serving in this role, and I have full confidence that with him working alongside our dedicated staff, the community is going to greatly benefit from their efforts. Sheriff Langley said in a statement after the ceremony.

Deputy McDowell comes to us with law enforcement experience having served the Carrollton Police Department since 2015, and during his employment with the agency he obtained specialized training earning certifications in Lidar, FTO (Field Training Officer), and all three levels of Supervision. For approximately three years, McDowell served the department as a leader in their Community Oriented Police Services (COPS) Unit. While serving within the unit, he developed, executed, and participated in hundreds of public relations events focused on building transparency within the community. 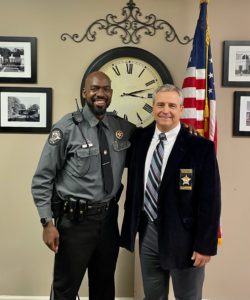 When he is not policing, teaching, or studying, Deputy McDowell enjoys coaching youth sports, exercising, spending time with family, volunteering at church, assisting civic organizations, and traveling. Deputy McDowell is an avid cyclist and is well known to many in the Carrollton community as Mike on the Bike.